Here is a limited list of hand picked resources for your ongoing learning and personal growth. These resources include articles, books, research, teaching series, and simple relationship tools that are part of our portfolio of resources we bring to our clients.

Through the discovery process, our clients develop a curiosity and deep commitment to learning and growing in the area of family relationships.

“Curiosity and a determination to learn and grow marks all of our engagements with clients. We believe it’s critical to overcoming challenges.” — Eric and Jennifer Garcia

The 5 Love Languages: The Secret to Love that Lasts

Falling in love is easy. Staying in love—that’s the challenge. How can you keep your relationship fresh and growing amid the demands, conflicts, and just plain boredom of everyday life?

In the #1 New York Times international bestseller The 5 Love Languages, you’ll discover the secret that has transformed millions of relationships worldwide. Whether your relationship is flourishing or failing, Dr. Gary Chapman’s proven approach to showing and receiving love will help you experience deeper and richer levels of intimacy with your partner—starting today.

The 5 Love Languages is as practical as it is insightful. Updated to reflect the complexities of relationships today, this new edition reveals intrinsic truths and applies relevant, actionable wisdom in ways that work (from Amazon description). 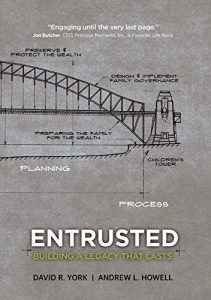 Entrusted lays out the foundations of Entrusted Planning process, which aligns the principles and values of a family with their tangible assets and prepares future generations to build a true and lasting legacy. It’s a process that draws from the very origins of estate law, which placed the highest value on who was involved—on who was entrusted.

Entrusted Planning goes back to preparing beneficiaries for wealth beyond just the legal concept of a trust and takes into account the relational maturation of the person or persons being entrusted as stewards of resources, not just consumers and users of it.  Entrusted Planning is about transferring opportunities instead of just assets and doing so over multiple generations (from Amazon description). 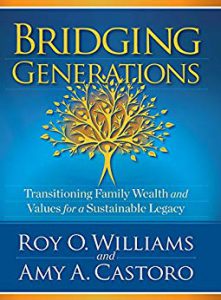 This book focuses on “Transitioning Family Wealth and Values for a Sustainable Legacy.”

Why do 70% of family wealth transfers fail? It’s a startling statistic. Years of blood, sweat and tears, passion and purpose poured into your endeavors.  Instead of seeing those efforts bring value and benefit to the world and to future generations, more often than not what results is heartache, pain, and loss. It doesn’t have to be this way.

Bridging the Generations – Transitioning Family Wealth and Values for a Sustainable Legacy provides you with insight, strategies and compelling stories on how your wealth can be successfully passed on from one generation to the next with the family unity intact.  You’ll benefit from learning: How true wealth is more than an impressive financial  balance sheet; How to put the family center and front; Five pillars to create a successful wealth transfer and succession for  your family; Real life stories of wealth transfers and successions done well and done poorly; Strategies you can apply now in your own transition planning.

This is a book every successful leader who will transfer wealth, and every professional advisor, and those who stands to inherit significant wealth would benefit from reading.  (Bridging Generations on Amazon) 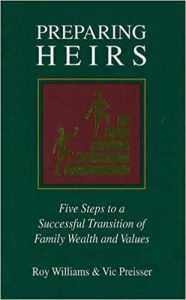 by Roy Williams and Vic Preisser

This book presents the “Five Steps to a Successful Transition of Family Wealth and Values.”

Preparing Heirs discloses the surprising findings from the authors’ research into the legacies of 3,250 wealthy families. With extraordinary insight, they reveal what the relatively small number of successful families had in common-how they achieved and maintained family harmony, and ensured the smooth transition of their wealth to well-adjusted heirs. They also warn of the wide range of factors that cause the majority of wealthy families to fail in their transition.

Preparing Heirs offers clear, concise, well-organized, and easy-to-follow instructions that will enable you to evaluate your plan for transitioning family wealth. Preparing Heirs is an assessment tool that can be used in conjunction with the services of qualified professionals such as attorneys and accountants. It addresses the major causes for the 70% failure rate in estate transitions, which lie within the family itself and are within the family’s control.

This book can help you develop a plan to transmit the family values underlying the accumulation of wealth and prepare your heirs to be good stewards and thoughtful administrators of that wealth. (Preparing Heirs Amazon Description) 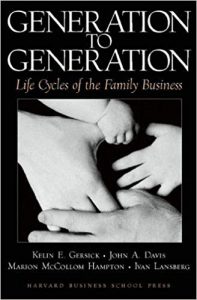 “Generation to Generation presents one of the first comprehensive overviews of family business as a specific organizational form.

“Focusing on the inevitable maturing of families and their firms over time, the authors reveal the dynamics and challenges family businesses face as they move through their life cycles. The book asks questions, such as: what is the difference between an entrepreneurial start-up and a family business, and how does one become the other? How does the meaning of the business to the family change as adults and children age? How do families move through generational changes in leadership, from anticipation to transfer, and then separation and retirement?

“This book is divided into three sections that present a multidimensional model of a family business. The authors use the model to explore the various stages in the family business life span and extract generalizable lessons about how family businesses should be organized.” (Generation to Generation Amazon description) 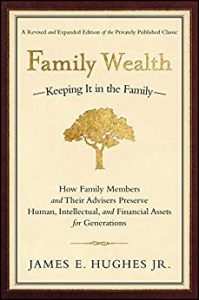 Family Wealth: Keeping It in the Family

This is a book on how family members and their advisers preserve human, intellectual, and financial assets for generations.

Every family, looking at the next generation, hopes to confer advantages that are more than just material and financial–to inculcate character and leadership, to inspire creativity and enterprise, to help all family members find and follow their individual callings, and to avoid the financial dependency and loss of initiative that can all too often be an unwanted consequence of financial success. Yet many families never succeed in realizing that vision, much less sustaining it for three, four, or five generations and beyond.

James Hughes has thought deeply about these challenges, and his insights are at once practical and profound. For more than three decades, he has personally guided multiple generations of families in creating strategies to preserve their human and intellectual capital as well as their financial assets. His teachings synthesize insights from psychology, anthropology, political history, philosophy, economic theory, and the law, with examples ranging from Aristotle to cutting-edge social science theory. His ideas have been taken up by numerous exceptional families, by their advisers, and by scores of authors, practitioners, and academics who have found value in the methods he pioneered. (Family Wealth Amazon description) 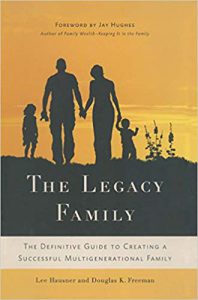 By L. Hausner and D. Freeman

This book is “the Definitive Guide to Creating a Successful Multigenerational Family.” Written by two experts in the field, will provide readers with a roadmap for detailing how to leave family wealth and more importantly, legacy, intact. Readers will learn a variety of skills, including how to articulate a collective vision and aspiration for the future which can be embraced by all family members nourishing close family bonds. (Amazon description) 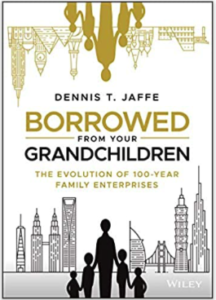 Borrowed From Your Grandchildren: The Evolution of 100-Year Family Enterprises

While creating wealth is a wonderful achievement, business families are also concerned with how their wealth is used to support their values, the lives of their children and the well-being of the community. Over several generations, families who are successful in growing their wealth have been able to reinvent themselves and their business in the face of significant environmental transformations and internal differences cause by family dynamics. Borrowed from my Grandchildren is a fascinating look at how large, long-lasting business families succeed across generations.

Author Dennis T. Jaffe, one of the leading architects of the field of family enterprise consulting, has interviewed members of successful, well known, 100-year family enterprises from 20 countries, who serve as role models for those wishing to see their wealth positively impact their children, employees, and communities. Half continue to own their legacy business and others have gone on to become family offices with a portfolio of shared assets, but all these families have sustained their values and identity as a family over more than three generations.

Offering the collected wisdom of nearly 100 global business families, this insightful book shares the real-life stories of partners in business and wealth management over three of more generations. Families that generate rather than reduce their wealth across generations, known as Generative Families, focus on engaging across generations and develop collaborative governance for both family and business to ensure responsible stewardship from one generation to the next. 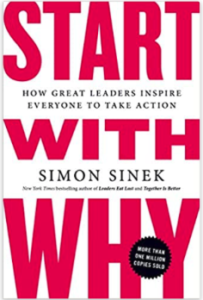 Start with Why: How Great Leaders Inspire Everyone to Take Action

In 2009, Simon Sinek started a movement to help people become more inspired at work, and in turn inspire their colleagues and customers. Since then, millions have been touched by the power of his ideas, including more than 28 million who’ve watched his TED Talk based on START WITH WHY — the third most popular TED video of all time.

Sinek starts with a fundamental question: Why are some people and organizations more innovative, more influential, and more profitable than others? Why do some command greater loyalty from customers and employees alike? Even among the successful, why are so few able to repeat their success over and over?

People like Martin Luther King Jr., Steve Jobs, and the Wright Brothers had little in common, but they all started with WHY. They realized that people won’t truly buy into a product, service, movement, or idea until they understand the WHY behind it.

START WITH WHY shows that the leaders who’ve had the greatest influence in the world all think, act, and communicate the same way — and it’s the opposite of what everyone else does. Sinek calls this powerful idea The Golden Circle, and it provides a framework upon which organizations can be built, movements can be led, and people can be inspired. And it all starts with WHY. 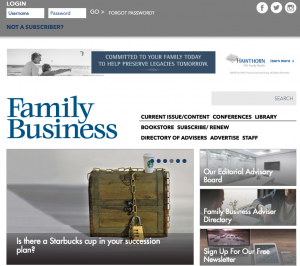 “Since 1989, Family Business Magazine has been the only North American multimedia publication serving the unique information needs of multigenerational family businesses, by providing news, profiles, expert advice and thought leadership. Through digital platforms, print magazines and conferences, we provide family businesses with the information they need to foster business continuity and family harmony. 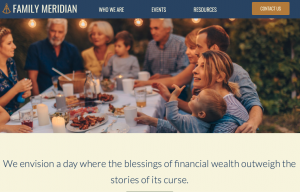 “Family Meridian is bringing staying power to family legacies. We provide peer-to-peer resources and events for high net worth families.

“Our vision is ‘Families thriving for generations.’ We envision a day where the blessings of financial wealth outweigh the stories of its curse. We believe partnership provides a rising tide that floats all boats. We desire to complement and not compete with any other biblical organization or service. Our role is to advocate and educate, not implement. We want to inspire families and connect them to the right resources for their specific needs.” https://familymeridian.com/who-we-are/ 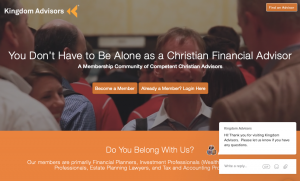 The vision of Kingdom Advisors is to serve the public by creating a recognized and credible specialty of Christian financial, legal, and accounting professionals within the financial services industry offering biblically wise financial advice. 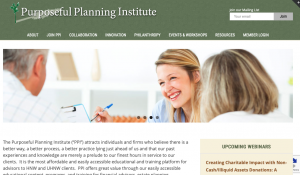 The Purposeful Planning Institute is designed to build collaboration between all of the professional disciplines and to support professional advisors who want to serve their clients, and their clients’ families, in deeper and more positive ways.

PPI is designed to support professional advisors who want to serve their clients and their clients’ families in deeper and more positive ways.  Our members are professionals from a broad spectrum of those who serve families of wealth and families in business including lawyers, wealth managers, trust officers, planned giving experts, psychologists and therapists who are family business consultants and family wealth advisors.  This multidisciplinary virtual community exemplifies a unique spirit of professional collaboration.

Scroll to top
By continuing to browse this site, you agree to our use of cookies.